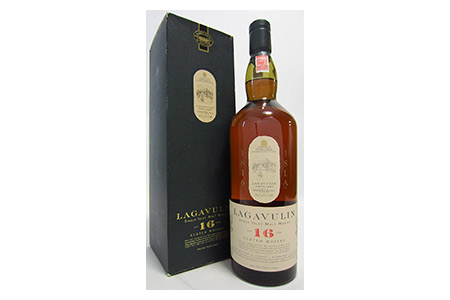 Lagavulin 16 Year Old is one of the now 13 ‘World Classic Malts’ and it is the standard expression for the distillery. Other Lagavulin expressions include the 12 Year Old Cask Strength and Distillers Edition, both of which are highly enjoyable.

Lagavulin distillery is located on the Southeast corner of Islay between Ardbeg and Laphroaig, and this is the one of the oldest distilleries in Scotland.

Lagavulin was legally founded in the year of 1816 and today is owned by the British giant Diageo.

The distillery sources its malt from the nearby Port Ellen Maltings, and of course it is nicely peated.

The Lagavulin 16 year old is matured mostly in ex-bourbon American White Oak casks, but is finished in ex-sherry European Oak casks. The long distillation and aging processes are quite helpful in getting characteristics and complexity that can be found in this wonderful and top class Islay malt.

Entirely Lagavulin 16 years old is an excellent Islay malt that I highly recommend. It’s rich and full-bodied, but doesn’t overpower in any way. It’s a well-balanced whisky that can be enjoyed on any evening when looking to relax.

The more I sip this the more I seem to enjoy it, but I can say that for quite a few different drams.If you’re curious about the 12yo Cask Strength, I will be reviewing that sometime in the near future.

Lagavulin produces a classic 16-year Islay single-malt which is well known for its mellow roundness and liberal use of peat. It can be quite difficult for you to find a bottle in retail that hasn’t been marked up dramatically.

The aroma is unmistakably smokey, with none of the molasses notes of some maltier Scotches. I smell a little pine or cedar, and maybe a suggestion of sea air or brine.

The aroma is clearer and more concentrated in the glass without water added, so I suggest smelling this whisky before adding a few drops of water, if that’s your thing.

The mouthfeel is smooth and luxurious, with a noticeably low level of fire on the tongue. The early flavors get straight to the oak, and then to the peat, with a hintof fruit or hazelnut.

There are medium notes of peat and some smoke on the tongue which are more pronounced in the finish. The finish is long and straightforward, mostly campfire and a suggestion of cherry or cherrywood.

The sugar of the barley is not forward in this bottle, but the balance between peat and malt, and the smoothness with which it comes off, make this a very satisfying dram.

I could not identify a difference between the glass with a few drops of water added and the glass without, except that the straight-up flavor was more cohesive and coated my mouth more fully.

I personally do not think this Scotch benefits from the addition of water.

This Lagavulin is a prime example of a smokey Islay malt with some years behind it. The peat is aggressive, but the oak balances it nicely. The age of the malt gives it a roundness and mutes the fire.

This Scotch might be paired well with a cigar, a small amount of fatty fish (salmon or mackerel), a well-aged steak, or a creamy dessert. It is probably best enjoyed by itself, however.