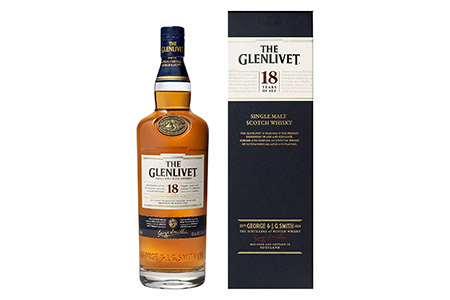 Glenlivet 18 year old Scotch whisky is truly a single malt masterpiece that is divine in its taste, body, aroma, flavor and finish. This single malt whisky that contains 40% alcohol comes in a 700 ml bottle that offers 22 standard drinks. Its elusive quality has earned it plenty of connoisseurs around the globe. So has its price that is the most affordable among others from the production.

Glenlivet 18 years old scotch is the second best selling single malt scotch in the world. With that kind of world wide market share and popularity, one has to wonder if it is any good.

Hard-drinks connoisseurs swear by their whiskies and more so if it comes from the Scottish Glenlivet brand. Their love for this brand of whisky is not misplaced for this malted masterpiece deserves all the adulation it gets from those who know more than a thing or two about this malted alcohol.

The 18 year old whisky from this brand is a staple of its production that boasts of having an endearing history behind it. Its founder George Smith was such an expert in whisky-making that today this brnd of 18 year old Scotch whisky occupies shelf-space in almost all liquor stores the world over. Those who know their wine, whisky and vodka well will vouch for the supremely elegant taste and finish that the alcohol bottle has on offer.

This 18yr old whisky is a final product of the blending of this single malt from some casks that previously held bourbon while others held sherry. The result is a single malt that is memorable and the sherry seems to come out on top in the overall flavor profile.

Its tasting note is unsurpassable and contains plenty of floral notes merging homogeneously with orange marmalade, spicy and nutty aromas. Do not miss the sherry notes that subtly waft out of it as the liquid rolls on your tongue.

Adding to its tempting taste is its bright gold color, vanilla and spicy flavors that round off with a smoky nutty finish.

There is a faint trace of peat the end of each sip that is too pleasant for words. Such is its appeal overall that for a seasoned drinker, the 18 year old whisky is one consistent and easy-to-drink alcohol with respect to its taste, flavor and finish.